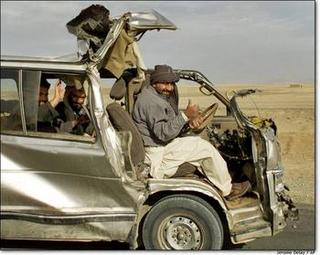 Place your caption in the comments section below.

2. When is the last time you were the new kid?
See above? In the recent post 9/11 world, i have had three new jobxs and each time I have been the new guy. In some environments, it was an easy fit, in others and constant struggle to let the real Roy fly.

3. If we met face to face, right now, what would my first impression be of you?
Freak who needs a haircut! Seriously, I don’t know. I can be down right charming and tend to go for the punchline immediately to disarm you. That said, I do know that it takes a few meets before people “get” me.

4. Who is the last person you said goodbye to?
Zac, at work last night as we left the building.

5. Joey, Jordan, Donnie, Danny or Jon?
I am not a Jordan! I guess I would have to go with Danny, for no real reason whatsoever.

I had this long discussion last week with my mother, who in passing said that the whole idea of creationism was starting to make real sense to her. After I picked up the coffee mug that I dropped on the floor, I struggled to find words to explain to her that the Biblical Creation story was myth, a tale used to convey, through the oral tradition of the apocrophy, how our world came about. That similar stories exist in nearly every pre biblical culture because mankind as a species has a strong desire to understand its world .

I asked her if she indeed believed in the science that brought about carbon 14 data which works to prove the age of our world. I asked her about the dinosaurs fossil beds in her home county of Moffat County, Colorado and if she believed those fossilized remains pre dated the existance of man..

She said she did.

How then can she explain creationism, equating man’s existance on the planet, coming to be “whole and unevolved.”

Struggling, she said that is where it gets confusing, but she hoped to learn more if futher bible study classes.

The whole discucussion reminded me of this tidbit from the April Scientific American:

In which the editors announce that they have finally given in to their critics’ demands and will no longer continue their politically biased reporting on issues such as global warming and evolution. Formerly proud members of the reality-based community, Scientific American now enters a new realm – the world of fair and balanced reporting. (via Dailykos) (a satire)

“Okay, We Give Up

There’s no easy way to admit this. For years, helpful letter writers told us to stick to science. They pointed out that science and politics don’t mix. They said we should be more balanced in our presentation of such issues as creationism, missile defense, and global warming. We resisted their advice and pretended not to be stung by the accusations that the magazine should be renamed Unscientific American, or Scientific Unamerican, or even Unscientific Unamerican. But spring is in the air, and all of nature is turning over a new leaf, so there’s no better time to say: you were right, and we were wrong.

In retrospect, this magazine’s coverage of so-called evolution has been hideously one-sided. For decades, we published articles in every issue that endorsed the ideas of Charles Darwin and his cronies. True, the theory of common descent through natural selection has been called the unifying concept for all of biology and one of the greatest scientific ideas of all time, but that was no excuse to be fanatics about it. Where were the answering articles presenting the powerful case for scientific creationism? Why were we so unwilling to suggest that dinosaurs lived 6,000 years ago or that a cataclysmic flood carved the Grand Canyon?

They dazzled us with their fancy fossils, their radiocarbon dating and their tens of thousands of peer-reviewed journal articles.

As editors, we had no business being persuaded by mountains of evidence.

Moreover, we shamefully mistreated the Intelligent Design (ID) theorists by lumping them in with creationists.

Creationists believe that God designed all life, and that’s a somewhat religious idea.

That’s what makes ID a superior scientific theory: it doesn’t get bogged down in details.

Good journalism values balance above all else. We owe it to our readers to present everybody’s ideas equally and not to ignore or discredit theories simply because they lack scienfically credible arguments or facts. Nor should we succumb to the easy mistake of thinking that scientists understand their fields better than, say, U.S. senators or best-selling novelists do. Indeed, if politicians or special-interest groups say things that seem untrue or misleading, our duty as journalists is to quote them without comment or contradiction. To do otherwise would be elitist and therefore wrong. In that spirit, we will end the practice of expressing our own views in this space: an editorial page is no place for opinions.

Get ready for a new Scientific American. No more discussions of how science should inform policy. If the government commits blindly to building an anti-ICBM defense system that can’t work as promised, that will waste tens of billions of taxpayers’ dollars and imperil national security, you won’t hear about it from us.

If studies suggest that the administration’s antipollution measures would actually increase the dangerous particulates that people breathe during the next two decades, that’s not our concern.

No more discussions of how policies affect science either – so what if the budget for the National Science Foundation is slashed? This magazine will be dedicated purely to science, fair and balanced science, and not just the science that scientists say is science.

And it will start on April Fools’ Day.”

Been surfing away leisurely all day in an attempt to avoid the heat.

How to poach the perfect egg I think I may try this next weekend.

Really Unusual Cat Name Generator. Some of these names are indeed priceless and could also be used for a name of a band. What a bonus.

The Fine Art Search Engine. Search for art and art resources on the web. Kind of fun in a lookie-loo kind of way.

Google Landmark Game. This is fun. They present you a famous landmark and you have to go find it on Google Maps. I have posted some very terrible times.

A 4096 Web Color Wheel . Need a new color for your web page background? They are all here and fully interactive interface. Mesmerizing.

Okay, the game is on.

The challenge for the weekend is this. Using your diggie camera (or regular camera if you must) photograph the alphabet and place them on Flickr. (A basic Flickr account is free for up to a 10 MB a month upload – size your pics down so you can post all 26!)

Give them the tag – Denver_Alpha and then we can see them all. And make sure you label the picture with which letter of the alphabet you are using. (“A”, “B”, etc. )

(Thank you Amazon, for the idea.) 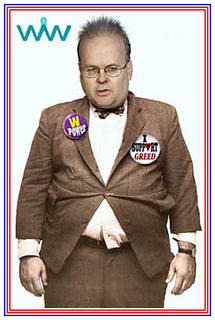 Please post your caption in the comments section below.

1. What four things do you need to do this weekend?
It is a big birthday extravaganza weekend. I need to find out the plan, buy a present and go to the celebration. Oh yeah, and vacume.

2. What were the last three things you purchased?
Gas, bottled water, prescription refills.

4. What does it say in the signature line of your emails?
” . . .but, I coulda used a little more cowbell. Gene, really explore the studio space this time. I mean really,explore the space. I like what I am hearing. – Bruce Dickenson

5. If you had vanity plates on your car, what would they read? If you already have them, what do they say?
“OMCSTYL” = OMC (Old Man Car) Style. 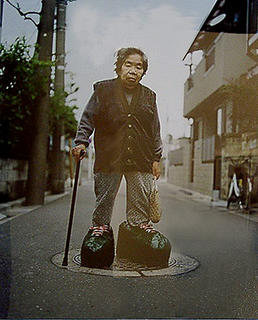 Please leave your caption in the comments section below.

1. What is the best thing about the city in which you live? What is the worst?
Denver, and especially its climate, is one the best kept secrets in the world. A really nice piece of heavan. One of the worst things about Denver? No real water. How perfect would this town be if it had a waterfront!

2. Describe an idea or invention of yours that you would like to see turned into reality.
A lot of good stuff is already out there. But in a real Rube-Goldburg way, looking much like a Dr. Suess machine, I envision a morning, grooming, breakfast making, coffee brewing system that flings from bed, to shower, to closet to the table and ready to eat some breakfast and start the day – with no effort on my part whatsoever.

3. If you could strike one word from the English language, which word would you choose and why?
Well, there are so many arent’ they. But the word that should be striken, because in fantasy world it would no longer exist would be Cancer. Either that or Murder.

4.If the world had a front porch, what would you do on it?
Stare at the stars and wave to my friendly Martian neighbors. Delightful Martini always on hand.

5. Did you think that being an adult would be cool?
I have always anticipated the next stage in life. I am 41 years old now and have no problem accepting the new challenges, wonder, limitations and prospects with being a full fledged adult.

The good folks at Drink At Work sent me over here yesterday for a bit of a film series. A set of Public Service Announcements urging folks to get on drugs. I laughed until I pee’d.

And I am now off to fight the Leprechauns.

(Thanks to “The Rev” for turning me on to Drink At Work. A great site from the writer of the daily cartoon strip, “Sally Forth.” (Don’t worry, he doesn’t like the strip very much either.) But if you do go visit, be sure and take in his daily web cartoon: Medium Large. That’s funny.